So, 2017. Like 2016 but worse. Political incompetence, dishonour and deceit in UK and US governments. “Social murder” – inequality exposed in the Grenfell Tower fire and its aftermath. “Economic murder” – evidence of a correlation between austerity policies and mortality rates. Evidence that austerity is hardest on the poor, black people, women, people with children, the disabled and their carers. Another warning – this time by a group of 15,386 scientists – of catastrophic climate change, resource depletion and mass extinction (pictured above – the only good news is the top left graph that shows how global action reduced ozone-depleting CFCs). And yet this year also produced a lot of good music, writing and ideas. This is a list of some things that made it less insufferable, less pointless and less hopeless.

Mark Fisher – Acid Communism
The death of Mark Fisher in January was a tragic start to the year. In remembrance, a quotation from his book Capitalist Realism was installed as a mural at Goldsmiths College, London, where he taught in the Department of Visual Cultures. 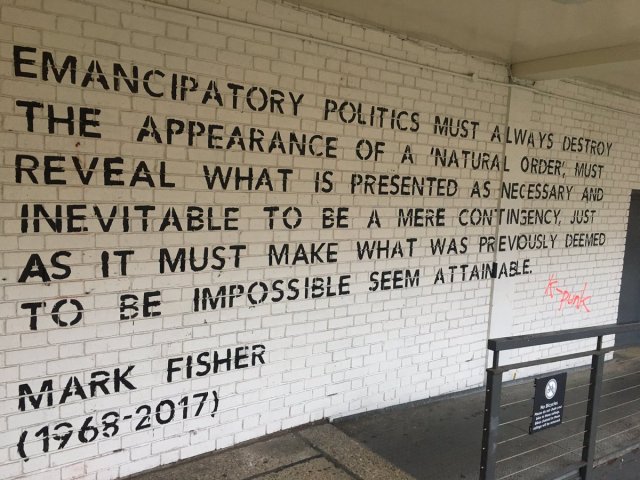 Acid Communism is the book on emancipatory politics that Fisher left unfinished. ‘Acid’ relates to the cultural aspect, a counter-movement to capitalist realism, destroying its appearance of a ‘natural order’:

De-psychedelization is an aspect of capitalist realism that reduces everything to the imperatives of business and to neurotic psychological interiority. (2012)

And ‘communism’ means building a vision of a new kind of socialist society, making the ‘impossible’ attainable:

…its realisation still lies ahead of us, provided we accept that what we are fighting for is […] the construction of an alternative modernity, in which technology, mass production and impersonal systems of management are deployed as part of a refurbished public sphere. Here, public does not mean state, and the challenge is to imagine a model of public ownership beyond 20th century-style state centralisation. (2014)

Acid Communism was one of the subjects spoken of in Mark’s memorial service. The idea has been developed in relation to the Labour Party membership that has been revived under the leadership of Jeremy Corbyn, as Acid Corbynism. Repeater Books plan to publish an anthology of Fisher’s writing on the subject, and there is an online archive of this work at https://egressac.wordpress.com/ I’m currently reading Derek Wall’s book about Elinor Ostrom, an economist whose research on polycentric governance of complex economic systems might be useful in realising the new model of public ownership that Mark Fisher imagined, beyond markets and states.

AudioBoyz – The Rise Of Gqom (Hypermedium)
In contrast with the previous releases on Hypermedium by EVOL and Patiño / No God Ritual which engaged with sound art theory and performance, this EP is clearly aimed at the dancefloor. From Durban, South Africa, it’s bouncy and banging music, made with pared-down arrangements of punchy polyrhythmic drums, vocal samples and synth stabs.

Roland Kayn – A Little Electronic Milky Way of Sound (Frozen Reeds)
I admit, I’ve not yet managed to listen to all 16 CDs in one 14-hour session. Kayn was a pioneer of cybernetic music, creating generative systems with modular synthesizers. Although his scores and the equipment he designed to realise them are pretty complicated, these pieces might sound fairly simple at first, because they seem to be composed of few elements. But there is almost no repetition, and that’s where the complexity is. It’s a document of Kayn’s success in setting up systems that create sounds and change them in interesting ways over long timescales. There is detail of different kinds at different scales. These are astronomical sounds – vast, diffuse, ominous, inhuman, impressive.

Jaap Vink – s/t (Recollection GRM)
Jaap Vink taught at the Institute of Sonology in Utrecht in the 1960s, where he would have crossed paths with Roland Kayn. Vink worked on algorithmic music and electronic synthesis – similar to Kayn, but from a different angle. This is a collection of work produced between 1968 and 1985 that sounds years ahead of Kayn’s album which was recorded in 2009.

The Ba-Benzélé Pygmies (Bärenreiter-Musicaphon, 1965)
Amongst old music that was new to me this year, two albums stand out. One is Improvisations for Cello and Guitar (ECM, 1971) by David Holland and Derek Bailey – this was the first Bailey album that really clicked with me. The other is music from West Africa. After I’d tweeted a link to a track from Musiques du Cameroun (Ocora, 1965), a reply from Charles Turner – author of the book Xenakis in America – said that album had been the only thing on his turntable from 1973–74, and he recommended checking out the Bärenreiter label. Very generously, he gave me a rip of the Ba-Benzélé pygmies LP recorded by Simha Arom. It sounds like nothing else, both weirdly alien and eerily familiar. There are solo instrumental/voice pieces and polyphonic choral music with percussion, songs of celebration and sorrow, lullabies and mythological stories. The liner notes include descriptions of the society and the music’s role in it, a musicological analysis, maps, and photos. In July, NTS radio did a good show based on West African recordings from the British Library Sound Archive: https://www.nts.live/editorial/british-library-sound-archive

Kara-Lis Coverdale – Grafts (Boomkat Editions)
Grafts is a piece in 3 parts, starting with piano, organ and dulcimer in a soft church-like echo, carefully placed and subtly manipulated. The middle section is like Philip Glass or Steve Reich – cinematic music made of phasing piano arpeggios, with bass, pads and choral voices. It gets increasingly hazy as it transitions to the final part based on soft warm loops, like a track on Selected Ambient Works Volume II, which slowly swells and fades. Gorgeous.

NYZ – FLD RCRDR / MCRTNL (Entr’acte)
Dave Burraston has been productive since winning a fellowship, working with Chris Watson and Richard D James and working at Moog and EMS studios, amongst other things. These two CDs represent two central aspects of this activity – field recording and modular/algorithmic synthesis. FLD RCRDR has recordings as its main source, and MCRTNL is synthesized sound, but both also make use of sequencing and processing with cellular automata systems. Each track is a little electronic world of sound. Burraston at his best. These albums beautifully suit Allon Kaye’s current product design for the label too. http://noyzelab.blogspot.co.uk/2017/09/nyz-fld-rcdr-mcrtnl-dual-cd-release.html

Anastasia Kristensen – Boiler Room Berlin 6th birthday
Listening to this electro/techno set and seeing how happy Kristensen is bouncing behind the decks is an antidote to all the bad stuff for an hour. This mix of new and old music is good too: https://www.residentadvisor.net/podcast-episode.aspx?id=598

Saplings Records
In response to climate change and habitat loss, Fis (Oliver Perryman) has set up Saplings Records. The label will produce no physical formats but will plant a hundred trees for each album sale. An EP by Fis and Rob Thorne is the first release. https://saplingsrecords.bandcamp.com/ 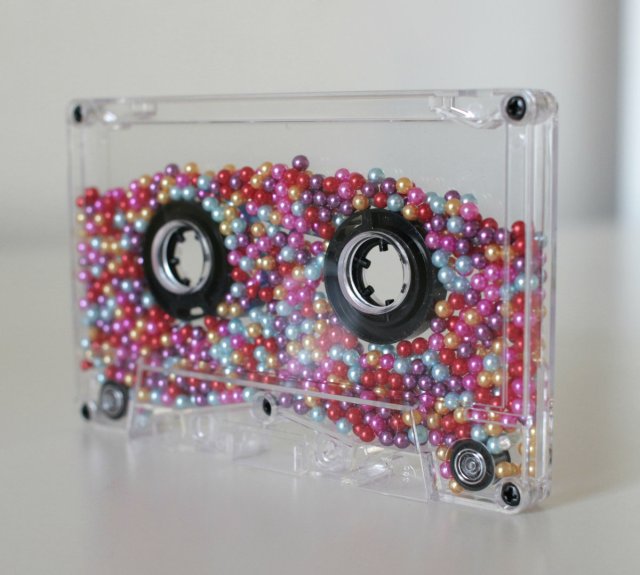 Graham Dunning, Tom White and John Macedo – Live Balls (The Black Plume Editions)
There’s been a lot of good releases on cassette this year: Ewa Justka – Acid Smut (Fractal Meat Cuts), Jay Glass Dubs – Dislocated Folklore (The Tapeworm), Kate Carr – From A Wind Turbine to Vultures (And Back) (Flaming Pines), EVOL – Tunnel Flop (anòmia), Allon Kaye – ATDK 1—Crime (Entr’acte), various artists – A Can of Worms (The Tapeworm), plus a few more mentioned below. One of my favourites doesn’t actually have any tape inside it. Based on a collaborative live performance with Graham Dunning and Tom White, John Macedo produced a limited series of cassettes containing lots of small coloured balls that jiggle around inside as it’s played. Other unusual music-related objects of note were Mark Fell’s political tea towel , Conditional’s Computer Music patch, and GOHV’s Chemicalistic Phlugm.

AGF aka poemproducer aka Antye Greie – SOLIDICITY
This album demonstrates the range of Antye Greie’s artistic practice. The first track starts with sounds of mosquitos, recorded in Finnish woodlands, that are then edited, processed and structured into musical forms. Next is an arrhythmic tribute to Rosa Luxemburg, then music made with a pure data patch connected to fungi. In these and in the other tracks about cryptocurrency, migration and politics there is an alignment between the subject of the work, its sound and its means of production.

tuuun – AA0001 (fluf)
Simple repetitive parts made from crisp and deep 808 drum sounds combine into a more complex rhythm. Against these drums an irregular but persistent pitched percussion is foregrounded, with some randomized hiss and an occasional acid squelch. Stephen McEvoy is the person behind both tuuun and fluf. He did an interesting project about tinnitus earlier this year, involving a survey of people’s experience of tinnitus, which I took part in. A summary of the findings was later shared with participants, together with music based on the data which is due for release on the MEDS label next year.

SDEM – MIXEDSIGNALGENERATORS (.meds)
A fluorescent green cassette by Tom Knapp, whose Mophoc Rez EP (Ge-stell) should have been on my list last year. It’s a piece to keep returning to because it’s difficult to work out what’s going on or to even remember what you just heard. MIXEDSIGNALGENERATORS is also ambiguous, comprising two sides of music concrète made, as the title suggests, from a variety of sources: field recordings, synthesized sounds, instruments, and all kinds of processing. Comparable in structure and quality, but with a completely different set of sounds based on physical tape manipulation, is Chew Cinders (Midnight Circles) by C. Reider. Another similar work of two extended parts, this one made of  digital sounds, is Diverted Units (Holodisc) by Maria W Horn.

Alan Moore – Jerusalem (Liveright, 2016)
I got this book as a present last Christmas, but only recently finished reading it. It’s split into 3 books and like Moore’s only other novel, Voice of the Fire, it’s set in Northampton, where he lives. Halfway through the first book, The Boroughs, the disorientation caused by chapters introducing new characters in different eras, each point of view told in their own language, and the hyper-orientation of detailed descriptions of the local streets became overwhelming. So I put it down and had a break to read a couple of other books (Ann Pettifor – Just Money: How Society Can Break the Despotic Power of Finance; Mike Savage – Social Class in the 21st Century). Picking it up again, the threads that connect the chapters became clearer, and it got easier to read. The lines converge to an end-point where the subject of the book becomes the book itself. Jerusalem is the story of a specific place and its people and a general philosophy on life and death.

Machine Woman – New Sept (MMODEMM)
New Sept is on a set of 5 cassette singles. A short and perky little track, it’s less complex than ‘Camile From OHM Makes Me Feel Loved‘ from the When Lobster Comes Home EP (Technicolour) but just as good. Like most of Machine Woman’s music, it makes me smile and makes me want to dance.

Peter Seligman – Dropup (Moss Archive)
This sounds like melted-down music, reduced to constituent parts that jostle against each other, re-combining into new monstrous forms that lurch around menacingly.

Various Artists – Misapplications (Conditional)
Calum Gunn’s label Conditional shows its strength and breadth with this compilation of computer music. This album includes something by all 19 artists on its catalogue.

Visible Cloaks – Reassemblage (RVNG Intl.)
Reassemblage is influenced by a film of the same name by Trin T. Min-ha. Using synthesized eastern instruments, the compositions have a Japanese aesthetic of simplicity and asymmetry. The more recent Lex has more of the same sound design.

Other things that got played a lot:

This entry was posted in Music, Writing and tagged Acid Communism, end-of-year list. Bookmark the permalink.