Today I learned that some suits used for motion capture use a pattern that’s a variation of the Sierpinski triangle fractal. I happened to see a tweet from @LASTEXITshirts celebrating the birthday of actor Andy Serkis (56 today), and I recognised the pattern on the suit he’s wearing.

Searching for ‘mocap suit sierpinski’ leads via a post on Reddit, Why do MoCap suits use Sierpinski triangles?, to the patent for the design in 2013 by Lucasfilm. The patent describes it as a ‘scale independent tracking pattern’. Fractals are, by definition, scale-independent, i.e. they look the same at any scale. A fractal pattern is useful for motion capture because whether near or far there are always some visible points to track. It also means that some of the pattern is visible when photographed in motion, when the image is blurred. 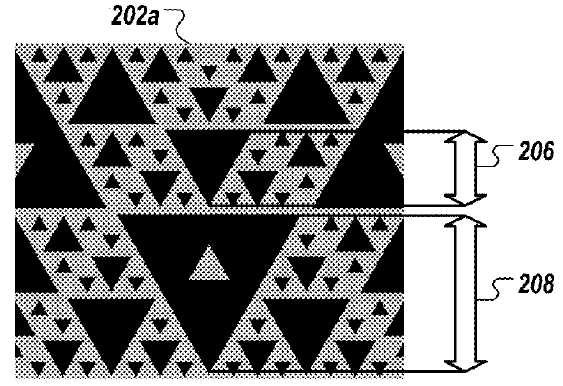 The pattern used for the mocap suits is clearly not quite scale-independent, however. It has only 4 levels (there are only 4 different sizes of triangle), so the range of scales is limited, but presumably this is sufficient for the job, given the size of a human body and the scale of the image on screen. Also, the pattern isn’t the same at all levels – only the largest triangles have smaller triangles within them – but it seems that this isn’t a key feature of how it works (my guess is that this particular pattern was designed to be protected by trademark.). Although the patent describes how the pattern is “configured such that a first portion of the pattern is tracked at a first resolution and a second portion of the pattern is tracked at a second resolution”, this doesn’t rely on the differences in the levels of the pattern. It’s the nested structure of the fractal, its self-similarity, that means different levels of the pattern can be tracked for different levels of detail. Triangles are suitable because they have identifiable points that can be tracked by computer vision algorithms, and these trackable points make up the polygon meshes used in 3D graphics.

Other shapes shapes work too, if arranged in a fractal pattern. The patent also includes another design for a scale independent pattern based on circles. Like the triangular pattern, the idea is that more shapes can be tracked with greater resolution. By chance, the low resolution of the image in the patent illustrates this feature quite well.